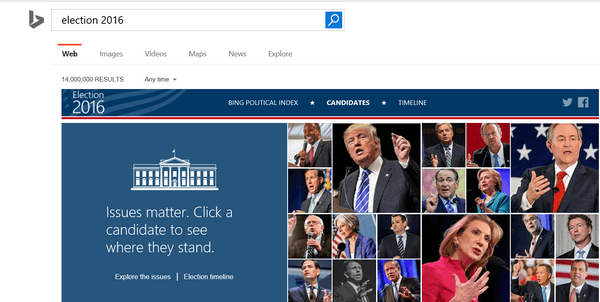 Google might be the king of search, but for any Bing users out there some presidential-related search terms may have prompted some interesting results over recent times. The Microsoft-owned engine has launched their new Bing Election Experience – a tool which launches as soon as the system notices any election terms being typed into their interface.

The most startling aspect is that eventually, Bing believes it will be capable of correctly predicting the winner of the upcoming election.

What is the Bing Election Experience?

In the simplest terms, it is an informational box that will appear when a relevant search term activates it. Alternatively, if you want direct access to the tool, it can be found over at Bing.com/elections.

The tool makes it especially simple for users to find out where each candidate stands on different issues. Armed with bar charts, it’s easy to see how candidates vary in terms of their conservative or progressive stance they have about these issues. It could be anything from environmental stances to healthcare – it means that users can easily see which candidates correlate with their own beliefs. For those users who do not generally take a keen interest in politics, it could make the voting process significantly more straightforward.

The tool also provides news stories and tweets that surround all of the candidates. The idea is to make everything as simple as possible.

How was the tool created?

Microsoft hasn’t worked alone to create the tool, but have instead enlisted the help of OntheIssues.org. This is a website which scans everything from political news, press releases and statements. By working with such data, Microsoft have then been able to gauge just how each candidate stands on all of the positions. From this point, it becomes quite straightforward for them to plot how libertarian, populist, moderate, conservative or liberal a candidate is.

The company have said that while the process certainly can’t be described as an exact science, it does showcase an unbiased view of the situation which is exactly what a lot of voters require.

Can the tool predict voting?

This is where the tool gets very interesting. Using all of the information which has been discussed above, Microsoft have been able to form their Bing Political Index. In short, this is just a summary of the scores which have been collected.

The company are then able to take advantage of their own expertise and find out what the US public are talking about. Using the likes of social media and general sentiment analysis, it becomes possible to find what is politically trending and in what capacity. From this point, a US public score is calculated.

And then, you guessed it. Both scores are plotted together to show Bing’s predictions on just how candidates stand alongside current public opinion.

How accurate is the tool?

Scientists at Bing have claimed that the results so far have mirrored exactly what the general US polls have revealed.

The most surprising element is that Microsoft have opted against including this data in their own process. They have said that this is because they have complete confidence in their own algorithm and believe that it could be more accurate than the polls.

While this may seem to be a bold statement, it’s worth taking a look back at some of Bing’s previous predictions. In the past, they used their expertise to correctly predict 34 out of 35 Senate races in the 2014 mid-term election.

Of course, even if they master more prediction success, it seems unlikely that it is going to catapult them closer to search engine market leaders Google.