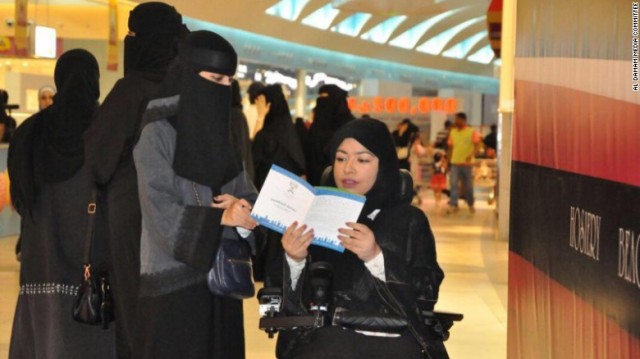 For years Saudi Arabia has been known for its male dominated political composition. The fact that women can’t even drive in this Islamic country gives a good indication on the restrictions that are placed on them in politics. Up until recently, they weren’t even allowed to vote – but things are slowly changing.

The late King Abdullah attempted to change things back in 2005, with this being the year that municipal elections were brought in. Despite his death, his successor King Salmon has tried to continue his legacy and this year’s election, taking place on December 12, has 900 female candidates in it.

There’s no doubt that women’s rights are changing and the last few years have certainly backed this up. However, candidates that are taking part in this election have said that it’s going to take a long time before these changes are evident for all to see.

The problem isn’t in relation to the candidates, but the number of voters. Unsurprisingly, the vast majority of male voters are expected to vote for a male candidate. It means that there is a big reliance on female voters to back up “one of their own” – and this is proving difficult. Data currently suggests that around 130,600 women have registered to vote – with this compared to over 1.3m men who have done. Already, there is a huge imbalance.

Women are reluctant to vote for a number of reasons. Firstly, transport is a big deterrent. The fact that they are not allowed to drive means that even something as simple as voting is almightily difficult. Then, some women just don’t see the benefit. They think that councils have limited powers anyway – so their vote is going to make little difference.

The country is going much further than it ever has done before to secure more voters though. It has now lowered the voting age to 18 and there are now more seats available.

Nevertheless, the general consensus is that it’s a huge uphill struggle for women to prosper in these elections. With many having to convince tens of thousands of male voters in their electorate, their situation is made almost impossible where sexes are separated anyway. In other words, when a campaign pitch arrives – men and women are scheduled for different days. It means that in the case of a female candidate, she will have to ask one of her male spokespeople to address the men which is hardly ideal.

Independent political analysts believe that the road to democracy is improving, but whether or not it will be in this election is debatable and something that we may have to wait a considerable number of years to see.