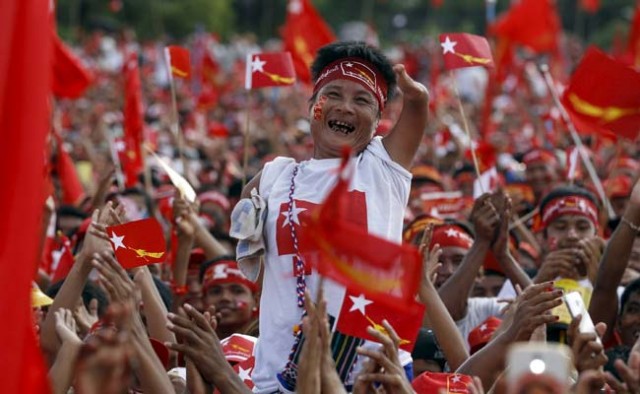 There’s no doubt that November’s Myanmar election caused quite the surprise, with opposition party the National League for Democracy shocking everyone with their comprehensive victory. Not only did NLD win, but they did so comfortably, securing two-thirds of the seats which means that it has the decision over the country’s next president.

Nevertheless, the saga certainly isn’t over. The country and the NLD still have a long way to go before Burma is back on its feet.

Who will be the next President?

In some countries, the leader of the NLD would be an automatic candidate to become the next President. However, under the constitution Aung San Suu Kyi is not in a position to do this as she has a foreign passport which makes her ineligible. However, she is certainly going to have a huge role in the whole process and whatever follows, after claiming some time ago that the President of the party would be taking orders from herself.

This is a major concern for the country and a lot of people are wary about the role she is going to play. Many believe that the main reason she has accumulated so many votes through this process is because of her father, who happened to be a national hero. Some believe that she is far too autocratic and this could hinder the country’s chances of stability. There’s no doubt that she is going to have to take something of a back-seat once a President is appointed, to guard against a power-struggle which could quite easily occur because of her ways.

What about the military?

It’s worth mentioning that many believed that the military were in pole position to claim the country’s leadership, courtesy of their USDP group. They were guaranteed 25% of seats, with the rules of the constituency reserving them this amount.

Therefore, the fact that they haven’t been able to do this has raised question marks over their next course of action.

There’s no doubt that hopes are high that the next government can turn Burma around and put the country on a stable footing for the first time in years. It has had to suffer human rights abuse and countless corruption epidemics – and there is a concern that the high expectations could be unrealistic. If this proves to be the case, some believe that the army will attempt to reassert control and this would obviously destabilize the country again.

The military’s main aims through this process have been building up the country’s economy. They believed that they had done sufficient to win the election and the sheer shock of the result means that nobody knows what might happen yet. Some believe that they may try and even annul the victory, just like they did in 1990, while others are hopeful they will take a back seat like countries such as Indonesia.

What is the main challenge for the NLD?

While the economy is one thing, the ethnic tensions in Burma are another big concern for the NLD. Over the last sixty years this has caused a lot of blood to be shed and even though Burma is now in a new era, it certainly doesn’t guarantee that it is going to be rid of these problems.

Of course, the initial cause of the tension was the government. They applied different policies to any foreigners in Burma, whether this was individuals or businesses, and this resulted in countless civil wars. Over time, this has resulted in a great divide appearing between the Burmese and ethnic groups. Now a new government is in place, it will be interesting to see if this changes. Already, some have stated their disappointment at the lack of a Muslim MP appointment – which suggests these ethnic problems are still a major problem for the country.

As such, there is still plenty of unanswered questions following this election. Most of the groups involved still don’t know their next action and the fact that ethnic tension is always on the horizon is never going to make the job of these parties any easier.

There are some positives though, most notably the relationship between Suu Kyi and the West. The US has invested significantly in the country, while the UK is also an ally. Elsewhere, relations are building with China which again puts the country in good stead.

However, a lot will depend on the NLD’s early performance, and how Suu Kyi lets her President operate.